Talk like a Native by Learning Spanish in Barcelona

If you want to learn another language, then one of the best things that you can do is to go where that language is actually spoken day-to-day. So if you want to study, learn, and master Spanish, why not go to the language’s birthplace in Spain and head to one of the most celebrated and lively cities in the world - Barcelona.

Learning Spanish in Barcelona is a whole adventure unto itself. The city itself is modern and lively with its own culture that’s quite distinct from the rest of the country. And of course, a place like Barcelona is a great place to improve your Spanish and use it on a daily basis.

This article will cover different topics about learning Spanish in Barcelona like:

It isn’t hard to find a Spanish language class outside of a Spanish-speaking country. As the second-largest language in the United States, there are plenty of places you can go to learn it. That being said, unless you’re in a bigger city, you probably won’t have a lot of choices when it comes to the different kinds of classes that are on offer. And this is one reason to consider learning Spanish in Barcelona instead.

Barcelona is a huge international city with learners from almost every country in the world. That means that the big difference is that in Barcelona, you have your choice of classes. You can find not only a class that matches your speaking level but also one that teaches with the style that works best for you. This is especially important in the early stages of learning a language to make sure that you don’t get too frustrated and give up on the language. So no matter what your specific situation is, you can find language classes that work for you.

In Barcelona, there’s a lot more out there than just language classes to consider.

A lot of people find it helpful to have the focus away from the language itself. Having something else to think about can often make learning another language a much easier experience. So if you want to learn Spanish in Barcelona, you should also consider taking a class that has nothing to do with language but that is taught in Spanish.

One of the best options is to think about doing something that’s hands-on. Two of the most popular options are cooking classes and exercise classes. Both of these give you the chance to learn lots of Spanish and do something fun at the same time.

Spanish-language cooking classes are a perennial favorite for anyone learning a language because you can work on your communication skills while also learning how to make something delicious. If you’re someone who likes to be sporty or active, then you try a whole range of classes at a gym or fitness center. This could be anything from spinning to yoga to most sports. You won’t learn as much vocab as you might with other classes, but you’ll take on some words and phrases that deal with something you like and if you get lost, you can just follow what everyone else is doing. 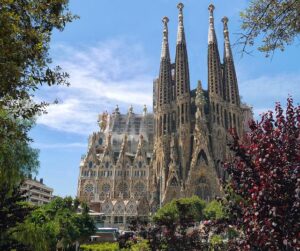 The city of Barcelona is a large bustling metropolis that is full of life and plenty to do. On any given day, evening, or night you should be spoiled for choice on what to do. So why not take the chance to do something fun that also helps you learn some Spanish along the way.

One of the best ways to learn another language is by doing something where learning the language is not the primary focus. Think about playing volleyball. When the ball is up and you want to claim it, you’re not thinking about verb conjugation or plural markings. This makes doing some sports or joining a team one of the easiest ways to learn some more Spanish. Additionally, this comes with a lot of repeated phrases, so even if you’re at a pretty low level, you can pick things up pretty fast.

Aside from group sports, you can also try volunteering. This gives you the flexibility to choose from a huge range of activities so you can pick something that interests you. And again, since you’ll have a goal that isn’t language-focused, you can more easily enjoy whatever activity you’re working on.

If you’re serious about learning Spanish in Barcelona then there are a few things that you should be aware of. This has to do with the city’s unique place as both a huge international city as well as being the largest city in Catalonia/Catalunya and a center of Catalan culture.

You’ll be learning a specific kind of Spanish

As one of the most widely spoken languages in the world, there are a lot of different varieties of Spanish out there. Across the world, there’s a huge variety of vocabulary, pronunciation, and even grammar. In Spain, you’ll find both a range of different local languages, but also several different dialects. So if you’re learning Spanish in Barcelona that means you’re learning Barcelona Spanish. In the end, this will just make your Spanish more natural as you adapt to a way of speaking that’s specific to the area.

Be Mindful of Catalan

While Barcelona is a great place to learn Spanish, it’s important to understand that it’s also the largest city in the region. Catalonia is a Comunidad Autónoma (Autonomous Community) that has two official languages - Spanish and Catalan. Almost all Catalonians can speak Spanish. In fact, you might even hear the two languages mixed together at times. However, this also does mean that Spanish is not everyone’s native language. Moreover, for some Catalonians, it’s not their language of choice. Some Catalonians are more comfortable speaking with non-Spaniards in English rather than Spanish.

More about languages in Barcelona >>

Barcelona is a large international city with a lot of universities and multinational companies. As a result, the city hosts a large international community with loads of people who can speak English. This can be a double-edged sword if you’re learning Spanish in Barcelona. On the one hand, you can often switch to English when you really need to. But on the other hand, this can actually block you from learning Spanish and slip into relying on English.

If you’re serious about learning the language, then learning Spanish in Barcelona is one of the best things you can do for yourself. The city provides Spanish learners with a huge range of classes and activities that will help you learn the language faster than you ever could in a classroom setting. Of course, the only way to find out is to come and see the city of Barcelona for yourself.

Can I find the language classes that are right for me in Barcelona? Expand

Absolutely. Barcelona is a huge city with a large international community, so you can find language classes that meet your specific needs.

Can I learn Spanish in Barcelona outside of the classroom? Expand

Of course! The city of Barcelona is a large and lively place. As such you can improve your Spanish by participating in a number of activities like sports, clubs, and volunteering.

Is there anything that could make learning Spanish in Barcelona difficult? Expand

Yes. Because Barcelona is a large international city, quite a lot of people speak English. As such, it can be easy to slip into English in certain situations.

“Spain-Ed.com has helped me look for the right school to learn Spanish for Adults. I can finally say I speak Spanish now!”

Decide where to learn Spanish

Search for programs and schools

Search and compare Spanish immersion programs, schools to learn Spanish or schools that help you prepare for the Spanish University Entrance Exam.

Look for programs and look for places to study

After you've applied, you're ready to start.

What our students are saying

“Spain-ed.com made me discover how and where to find schools to do the university entrance exam.”

“Learning Spanish used to intimidate me, I can now understand and speak Spanish!.”

"The Spanish immersion program was the best choice I ever made"

"I loved learning Spanish and Barcelona!."

If You Have Any Question,
[email protected]

Start here
We use cookies on our website to give you the most relevant experience by remembering your preferences and repeat visits. By clicking “Accept All”, you consent to the use of ALL the cookies. However, you may visit "Cookie Settings" to provide a controlled consent.
Cookie SettingsAccept All
Manage consent