Learning about Barcelona’s People and Population

The city of Barcelona has been making a name for itself for ages as a destination for culture, art, architecture and music. With so much creativity and a distinct culture, it’s worth taking a look at the people who actually live there.

This article is going to take a look at the population of the city itself, including

The Basics of Barcelona’s Population

As of the 2018 census, Barcelona has a population of about 1,620,000, making it the second-most populous city in Spain after Madrid. Believe it or not, the city actually used to be more populous with more than 1,700,000 people in the 1970s, but there was a period of emigration out of the city in the 1990s.

Spread across the city’s 10 distritos municipales (municipal districts), that gives Barcelona a population density of about 15,900 people per square kilometer/ 41,400 per square mile. To put that in a bit more context, that makes Barcelona one of the most densely populated cities in all of continental Europe. In fact of the city’s 73 barrios (neighbourhoods), 45 have a population density of more than 20,000 people per square km. 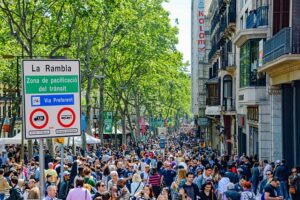 Where is Everyone in Barcelona

Naturally, the exact number of people changes according to the district you’re in. In fact, the population of the city is distributed very unevenly. Roughly only 10 percent of the city’s population lives in half the city’s total space. Conversely, one-half of Barcelona’s total area houses 90% of its population.

Who Lives in Barcelona

Now that you know some of the basics of Barcelona as a city, let’s look at who actually lives here. To understand this, it’s important to understand its roles as the capital of Catalunya as a large Spanish city and as an international city. As such, in addition to native barceloneses, Barcelona has residents who are from around the world, from other regions of Spain, and from other parts of Catalunya.

In Barcelona, roughly 60% of the population is made up of people who were born within the region of Catalunya. And according to the latest census data, 18.5% of Barcelona residents come from other parts of Spain.

Today, About 20 percent of the current population of Barcelona was born outside of Spain. This influx of non-Spanish migrants is something new to the city with non-Spanish residents numbering only around 8.5 and 4 percent in 2001 and 1996 respectively.

The majority of non-Spanish city residents are from countries in the European Union, with Italy and France being the largest countries of origin. Aside from European migration, Barcelona also has a fairly large community from Pakistan and China with both groups numbering around 20,000. The other large migrant population comes from South America, specifically from Bolivia, Ecuador, and Colombia.

Getting to know Barcelona Residents

Aside from where they come from, residents of Barcelona vary considerably in things like age, religion, and language. In terms of age, about 87.5% of barceloneses are of working age. The largest portion of the population (56.9%) is between 45 and 64, while 25-to-44 year-olds make up 30.6 percent.

The largest religion in Barcelona is Catholicism by far with almost 50 percent of residents identifying as Catholic. Aside from that, there’s a sizeable part of the population that doesn’t identify with any religion.

We’ve discussed the topic of language in Barcelona in another article, but we’ll give you a quick breakdown here as well. Spanish remains the dominant language of the city with it being used almost universally. Aside from that Catalan is the co-official language of the comunidad autónoma of Catalunya and by extension of Barcelona. Today about 72.2% speak Catalan and it’s used in writing and signage throughout the city.

Is Barcelona the most populous city in Spain? Expand

No, Madrid has the largest population in Spain, although it takes the number two spot.

These days, more than 70% of Barcelona residents speak Catalan.

How much of Barcelona’s population comes from outside of Spain. Expand

Today about 20 percent of Barcelona inhabitants come from outside of Spain with many coming from the European Union, Asia, and South America.

We use cookies on our website to give you the most relevant experience by remembering your preferences and repeat visits. By clicking “Accept All”, you consent to the use of ALL the cookies. However, you may visit "Cookie Settings" to provide a controlled consent.
Cookie SettingsAccept All
Manage consent